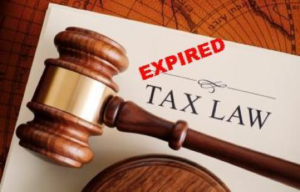 The Joint Committee of Taxation’s report issued on January 8, 2016, listed 37 tax provisions expiring in 2016; one on March 31 and all the others on December 31. However, one of these (number 19) may have a great impact on individuals.

It is a general rule of taxation that forgiveness of debt is taxable income. As a result of the mortgage crisis Congress enacted the Mortgage Forgiveness Debt Relief Act of 2007. The goal of the Act was to except from income the forgiveness of up to $2,000,000 of acquisition indebtedness on a principal residence. This allowed homeowners to modify loans, enter into a short sale or go through a foreclosure without having to worry that the forgiveness of debt would generate income tax.

The Act applied to the debt which was forgiven prior to January 1, 2010. This expiration date was extended four separate times by subsequent Acts with the final expiration date being January 1, 2017. It is anticipated that Congress will not act to extend this deadline. Thus, homeowners who did not have a written agreement with their lender for the debt forgiveness by December 31, 2016, or who did not finalize the transaction by that date will have to declare all forgiven debt in income.

There are two main exceptions to discharge of indebtedness income. The first is insolvency on the date the debt was forgiven. Under these circumstances, the taxpayer will have to attach certain information to his/her tax return. The second is if the discharge occurs in a bankruptcy. Timing is very important with this exception as the debt itself must be discharged in the bankruptcy. It should be noted that neither exception gives the taxpayer a total pass. The forgiven debt which is excluded from income will be taken into account through the reduction of certain benefits.

The failure to extend the mortgage debt forgiveness statute may have serious repercussions for taxpayers who negotiate a principal reduction or lose their homes in 2017 and beyond unless they qualify for an exception. Please contact my office if you need more information regarding discharge of indebtedness income, and its exceptions.

Home Mortgage Interest Is Deductible Or Maybe Not